Volunteer Leadership takes many different forms during a campaign. The San Diego Public Library raised an astonishing total of $185 million. At the time, it was the largest Library campaign in the history of libraries. Although much talked about What you may not know is that $20 Million of that total was raised in the last eleven weeks of the campaign and $1.6 Million of that amount was raised just 10 days before the opening of the downtown central library. How did they do it? With the incredible support of their volunteers, of course.

The star volunteer leaders of the campaign are…

“Libraries have always been special for us,” says San Diego philanthropists, Joan and Irwin Jacobs, who made the campaign’s lead gift of $10 million and offered it as a match to encourage others to give. I sat down with Jay Hill, CEO of the Library Foundation, to talk about volunteer leadership. Jay says, “Without Joan and Irwin’s leadership very early on, it would not have happened. Not only did Dr. and Mrs. Jacobs give the lead gift, they came to the City Council hearings to show their support of the library. Ultimately, they became the face of the library campaign.”

Jay explained that the Library campaign did not have what you would consider traditional ‘campaign leadership’ with a campaign chair and a committee; instead they had volunteer leadership in spades.

There was the “the dynamic duo that convinced the City’s leadership to build a new main library.” In 2006, the Library Foundation board was made up of five trustees. Today, the Foundation board has 18 members. During the time of the campaign, Judith Harris and then Mel Katz chaired the Board. In July 2, 2010, the Voice of San Diego printed an article entitled “In Mel and Judith, we trust.” Mel stated that he “wouldn’t take no for an answer” and that “if you really want something bad enough you can get it done and you can get it done in this town.” Not only were these two “tough to fight”, they were creative. When the City told them they needed a miracle to raise the money, they found a way to raise $20 Million through building a Charter School at the Library – something that was unheard of. Mel was so confident that the Library could raise the money, he bet on it – on the record. However, Scott Lewis, Voice of San Diego Editor in Chief would not take that bet because he didn’t want to bet against the Library. 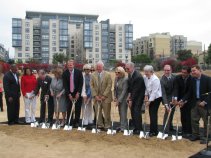 Not only did the funding come down to the wire, so did the City’s approval of the project. The Library building and campaign was incredibly unique because it was an intersection of politics and philanthropy. The Library had to raise $85 Million in order to access $80 Million from the City and $20 Million from the State of California. The Library had to break ground by August 1, 2010 to retain these funds. City Council was voting on June 29th to approve the project. Mayor Jerry Sanders became an advocate for the Library project and pushed this vote through. This was key support at a time when the City was in a financial mess and the Library was not a priority. The Mayor is also credited for attracting one of San Diego’s major philanthropists to give to the Library based on her admiration for Mr. Sanders and his support of the Library.

The Library campaign was decades in the planning and execution. With a looming deadline and a daunting goal, the Library needed long-time library advocates and Board members, Jim Dawe and Katie Sullivan. Between the two of them, they have 45 years of volunteer service to the San Diego Library. They led the charge on the community campaign. Not only was Katie (and her husband) major donors to the campaign, she was a tireless advocate for engaging all 36 branches in the campaign even though the pinnacle building of the campaign was the new downtown library building. This turned out to be a smart move.

Katie launched a “buy a brick campaign” so that all library and community supporters big and small could support the Library. Jay admits that he was wrong: “At the time, I had my doubts.” After all, raising money by selling bricks is not the best return on advancement, but Katy knew that the bricks were important because it would allow families to claim ownership of their library – and in turn support the library. In the end, the library sold 3,500 bricks and raised $1 Million. Keeping in the vein of her personal approach to involving the community, Katie signed every single thank you letter to the donors who bought a brick. The Library bricks have become famous in their own right. They are more than what we consider as typical donor recognition – there are people’s stories embedded into each one. Like the brick that says, “Will you marry me?”

Betty Bloomer, a neighbor of the downtown library, thought it was very important to have this public asset so she baked brownies and cookies every day for the construction workers. She ended up also making them for potential donors who were touring the construction site and considering a gift to the campaign.

Thanks to the volunteer leaders, new donors began giving to the Library and giving big! Nine first-time donors gave 7- and 8-figure donations for a total of 18 gifts at this level… plus 21 six-figure gifts and a total of 120 gifts of $10,000 or more.

Due to the campaign volunteer leadership, the Library stands today as a beacon of hope to many from the homeless man who personally shook Dr. Jacobs hand and thanked him for funding the Library he uses everyday to the thousands of students who go to school on the 6th floor of the library.

1 thought on “The Leaders Behind the Library”

Hi! I am Renee Herrell Fitzgerald, a seasoned consultant of 15 years with 20+ capital campaigns under my belt and over 50 nonprofit clients served.